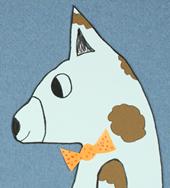 good news! the film i starred big in was sent in to cineyouth film festival, and it gots ins!!!!! my little one inchness could not handle it, and i fainted big out of excitedness! my mommy and daddy were very excited, too and they turned real RED.  i am now a star, so i got a new headshot, but the lights were so, so, so, so bright, and i fainted real BIG again.  i had huge excitedness because of the festival.  our people are going to take us to it.

WUFF, CHEE-WI    ps, soon my daddy qkee-wi will write about what the festival is like.

We had a great time at the CineYouth Festival in Chicago this weekend!  The people who came to the festival had lots of fun watching the film and meeting little Chee-Wi.  Chee-Wi got interviewed on the red carpet and gave out tiny paw-tographs.  He was so tired at the end of the day, he fell right asleep in Mee-Mi's fuzzy arms.  Thank you for all your nice letters to Chee-Wi and us.  Check back soon for more news about where to see the film!

After a year of work, our people have completed the stop motion film! It's 6 minutes and 41 seconds long (a long time for us little dogs).  They took more than 5,000 photographs of us.  We moved a lot, and the lights were very hot.  We panted to keep cool.

Chee-Wi will write when we find out where you can see the film!